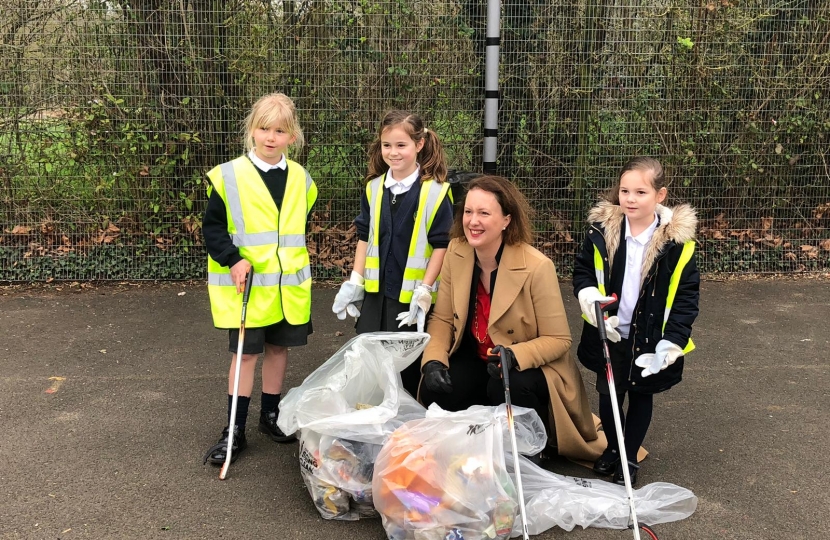 The aim of the GBSC project is to bring communities together by making a difference to the environment on their doorstep. Last year, despite the ‘Beast from the East’, over 370,000 volunteers took part across the country and collected over 630,000 bags of rubbish.

Keep Britain Tidy hope to build on this and get even more people out picking up litter in 2019. It is still not too late to get involved; the campaign runs from March 22 to April 23 and will see up to half-a-million people across the UK taking action to clean up their communities. There are many ways to join in, from organising a large community litter-pick to collecting rubbish spotted while out and about in the local area.

Speaking after the day, Victoria said: “As Parliamentary Champion for Keep Britain Tidy, this is an issue close to my heart. I was delighted to see a high level of engagement in schools throughout North Oxfordshire and enjoyed the opportunity to pick litter throughout the day. I hope all my constituents will join in and pick up any rubbish they come across in their communities.”

To find out more about the Great British Spring Clean visit www.keepbritaintidy.org.

Following an Opposition Day debate in Parliament on Wednesday 24 June, Victoria Prentis has issued the following statement alongside her fellow Oxfordshire Conservative colleagues: