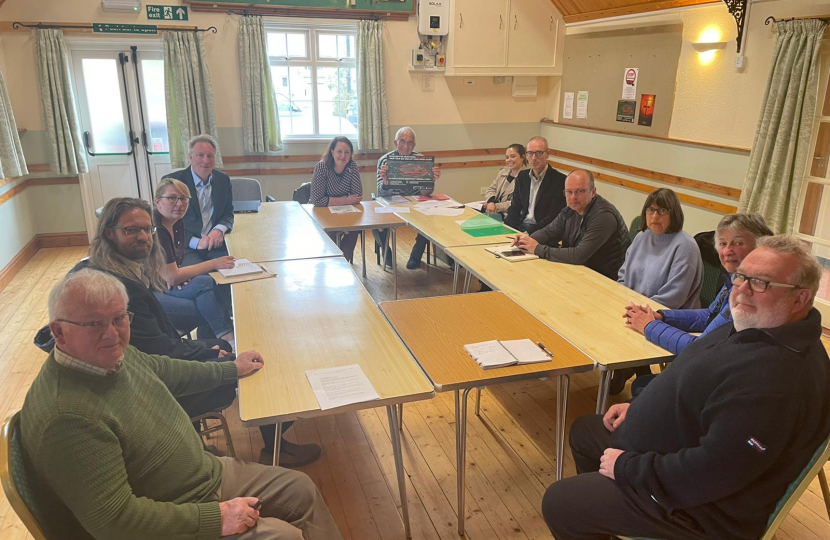 Last Friday, I was pleased to sit down with members of Bucknell Parish Council and local residents to discuss the proposed Hawkwell Village housing application.

A number of constituents have contacted me regarding this application in recent weeks. The Stop Hawkwell campaign has raised a number of significant concerns about the proposals and it was helpful to discuss these in greater detail. Residents were keen to point out to me that the plans for the application significantly exceed the land allocated for development in this area under the adopted Cherwell Local Plan. They argued that this would effectively merge Bucknell with Bicester, as the new houses would come within 100 metres of properties in Bucknell.

The Parish Council also emphasised that the proposed development relies on the re-alignment of Howes Lane, despite the funding for this recently being withdrawn by Oxfordshire County Council. Overall, residents feel strongly that the existing local infrastructure - from highways to healthcare and education - would not be able to cope with a development of this scale. I am aware that a number of the statutory consultees have also criticised the application for failing to set out how this infrastructure would be upgraded to the necessary level.

I share many of the concerns which have been raised about this application. I will be submitting my own letter on the proposals and will also be speaking to the Council in the coming weeks to ensure that my constituents' concerns are fully considered.

In recent weeks, I have been contacted by many constituents who are concerned about the volume of proposed developments currently being considered around Bicester and the surrounding villages.

Meeting of the G7 Justice Ministers

It has been a privilege to represent the UK at the G7. As I said in my statement in Berlin today, we stand shoulder to shoulder with Ukraine in the investigation and prosecution of abhorrent crimes.