Victoria Speaks About Prison Reform During House of Commons Debate 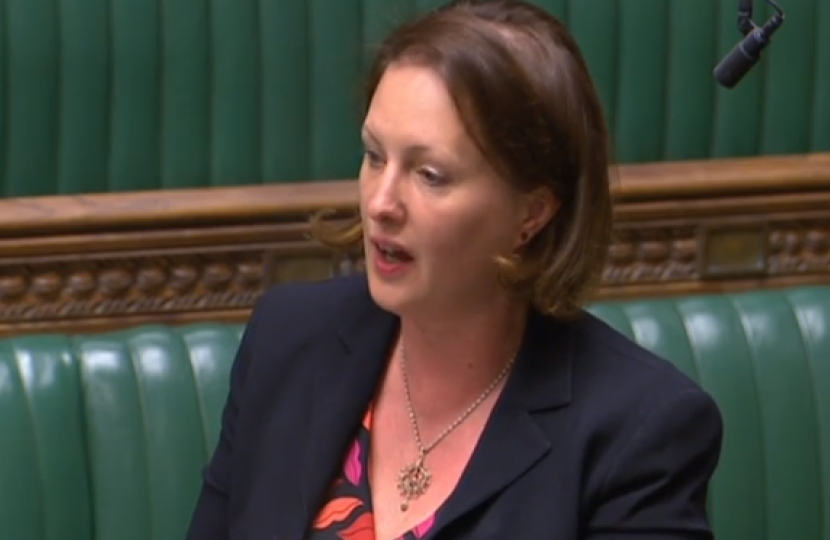 On Tuesday 14 May, Victoria Prentis MP spoke passionately about the importance of prison reform during her speech in the opposition day debate on Prisons and Probation.

The UK’s prison population is both growing and becoming increasingly challenging in nature; many prisoners have complex health and social care needs. A recent publication by the Justice Select Committee, of which Victoria is a member, highlights the urgent need to develop a long-term strategy which accounts for this, as well as ways to reduce ethnic and racial disproportionality.

During her speech, Victoria emphasised the importance of prison management and conditions that promote rehabilitation, not only for the prisoners themselves but for their families, communities and future victims. She also called for the new Prisons Minister to take further action in several areas, from evaluating current policy of disclosing young people’s criminal records to prohibiting Friday releases for vulnerable prisoners, at a time when many emergency services are closed.

Victoria said: “I do argue in favour of prison reform. The most compelling reason for that is saving future victims from crimes which will ruin their lives, and we have got to take this seriously. The Ministry of Justice needs to demonstrate it has a long-term strategy to ensure the sustainability of the prison system. Understanding ethnic and racial disproportionality and reducing it must form a key part of this.”

Please see below for a full transcript of Victoria's speech, taken from Hansard:

It is a pleasure to follow the powerful speech by the hon. Member for Barnsley East (Stephanie Peacock) and friends from across the House who broadly take the same view on the progress we need to make with the probation system. I am not going to focus on that. My views are carefully set out in the report of the Justice Committee and have been well rehearsed by my colleagues from the Committee on both sides of the House. However, I noted carefully what the Secretary of State had to say, and I am extremely hopeful that we will have an announcement or statement from him in the very near future. I hope the result will be one that we all applaud.

As ever, I would like to talk about prisons. It always shocks me how empty the Chamber is when we discuss prisons. If we are serious about helping the lowest strata of society, we surely have a fairly obvious place to look to find them. I for one was very grateful that the Opposition chose this subject for today’s debate.

I am fortunate to represent one of the biggest constituencies in the country. The number of my electors is broadly the same as the number of adult men in prison. The point I am making is that there are a lot of people in prison, a lot of families affected and, perhaps more importantly, a lot of future victims who are affected by our failure to treat people and by the breeding of future criminals in prisons as they are run at the moment. We must accept that about a fifth of prisoners are sex offenders and that nearly all of them will be released into our communities. Members know that I spend a lot of my time here arguing in favour of prison reform, but the most compelling reason for me to do that is that we must save future victims from crimes that will ruin their lives.

The Justice Committee has written not only a marvellous report about transforming rehabilitation, but a big report on the prison population—for me, it is our magnum opus—which I hope the new Minister, the hon. and learned Member for South Swindon (Robert Buckland), has read and digested and will return to many times during his tenure. I will whizz through the main recommendations of that report and then give him some jobs for the rest of the week.

Our report’s first recommendation is that

“The prison population has become increasingly challenging in nature, with prisoners often having complex health and social needs. Many have learning disabilities or mental health conditions”,

and that the Ministry of Justice needs to

“acknowledge the challenge it faces and demonstrate that it has a long-term strategy”.

Secondly, the prison population is projected to grow, and the existing approach “limits the scope” for the Ministry thinking more laterally about planning for that growth. It states that the “more challenging mix” of those sentenced to custody is likely to be partly attributable ​to the impact of wider social factors over which the Ministry has no control, but the Ministry and prison officers have to pick up the pieces.

The third recommendation is that

“Trends in ethnicity and the social drivers of complex and challenging behaviour should be more explicitly identified”.

“To close the large gap between the money allocated to prisons by the Treasury and the current costs of running and maintaining them, the Ministry of Justice has estimated that it would have to reduce the prison population by 20,000 places. By the Ministry’s own admission this is not achievable under existing strategies and funding arrangements.”

How will the Minister possibly close that gap?

We have got to take prison reform seriously. This is my fourth Prisons Minister. There have been six Secretaries of State for Justice since 2010. All of them—certainly the Prisons Ministers—have been one nation, compassionate Conservatives. I stalk their every movement, as this Minister will find out, and I count them among my closest friends in this place; I hope it is mutual. It is really important that the current Minister can stay in place for long enough to make substantive change.

Unless he is in the Cabinet.

Oh no, he is not going anywhere—this is a long-term sentence! I have the highest regard for the current Minister. He has done more than his fair share of heavy lifting in the impasse on Brexit. I offer him the following suggestions with affection, but they are urgent, and I wish him to do them immediately.

No. 1, we must accept that diversion from custody is the only answer for sentences shorter than 12 months. To do that, we need robust alternatives, not a “get out of jail free” card. Once we have those in place, we need to re-educate judges, who in my experience—as the Minister knows, I know at least one extremely well—are kind, well-motivated and have seen it all before. We need legislation to reduce the number of short sentences. We have to stop churn through the prison gates.

No. 2, we need a full review of categorisation. It strikes me that several Members here today are well placed to lead that review; I am not looking too hard at any Member on either side of the Chamber. We know from Lord Farmer’s review that being close to family reduces reoffending. Current categorisation is holding us back. We have new evidence about the age of maturity, particularly in boys, which needs to be fed into decisions on where we place people.

No. 3, the Minister needs to have on his desk—in my view, every morning, but possibly every week—figures on the regime, by which I mean hours outside cells and numbers of people in segregation, for every prison in the country. Only then can he truly evaluate what is going on. I would be grateful if he shared those figures with the Justice Committee. While he is at it, could he ask for monthly figures on imprisonment for public protection and share them with us? That would be really helpful.

No. 4, we need to end Friday releases immediately. There is no excuse for releasing people at the end of the week, when services are simply not available to help them.​

No. 5, we need to evaluate why and when we make children and young people disclose their criminal records. We know that it ruins their lives. A diverse group of MPs are championing that, from my right hon. Friend the Member for Chipping Barnet (Theresa Villiers) to the right hon. Members for Warley (John Spellar) and for Tottenham (Mr Lammy). The Home Office and the MOJ need to decide who is responsible for that policy and act as soon as possible. It is not right for any child’s life to be ruined by an early misdemeanour.

No. 6, for years we described—and I described in court—our sex offender training programmes as the gold standard. A substantial amount was spent on producing those programmes, but they have conclusively been proved to have failed. Can we evaluate the programmes we have put in their place? The number of sex offenders is growing.

No. 7, we need to block mobile phone reception in prisons now—why on earth not?

No. 8, we need to provide a £37,000 scanner for every prison to stop drugs getting in. Everybody from the Minister down needs to go through them. There was a major stabbing of a prison officer in Bullingdon Prison in my constituency last week.

No. 9, prisons are places of radicalisation. We need to grasp that and not lock people of similar views together simply because it makes control easier. A categorisation review might give us evidence to help with that.

No. 10 is on race. We need to be honest. It is not right that a black woman is more than twice as likely to be arrested as a white woman. I am pleased that the all-party parliamentary group on women in the penal system will look into the arrest of women. More than half the inmates held in prisons for young people in England and Wales at the moment are from a black and minority ethnic background. That is an extraordinary figure and not one to be proud of, and real change is needed. In short, I fear there will come a point when the Minister wishes he was back with the withdrawal agreement Bill.