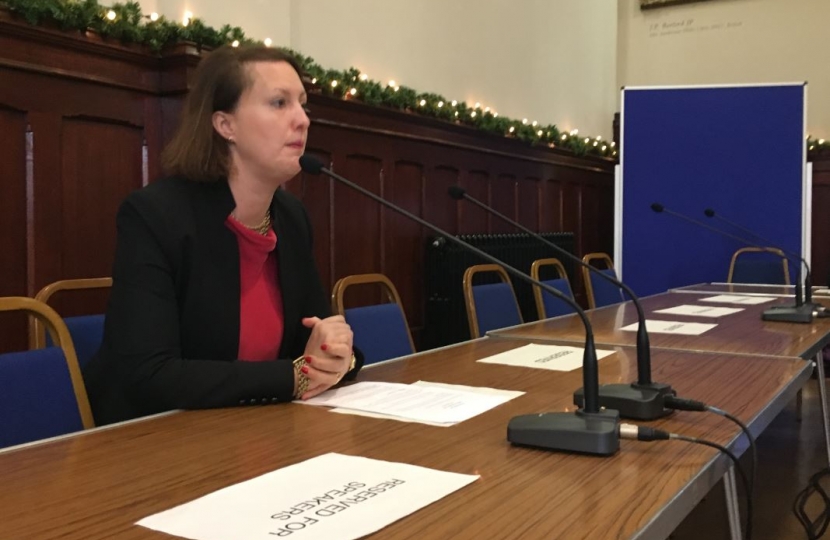 Wednesday 19 December marked the Banbury Health Overview and Scrutiny Committee’s (HOSC) evidence session. The special day-long session focused on the impact of the downgrade of maternity services on people living in north Oxfordshire, particularly staff, expectant mothers and those who have given birth since obstetric services at the Horton General Hospital were closed over two years ago. The newly formed HOSC committee was set up off the back of the Secretary of State for Health’s recommendations earlier this year, and has the powers to scrutinise health decisions in the Banbury area.

The evidence session brought together representatives from all areas including local MP, Victoria Prentis, former MP, Sir Tony Baldry, elected councillors, mothers, campaign groups, national health bodies and hospital staff. Victoria was invited to speak at the start of the meeting, highlighting the strength of feeling locally about changes to maternity provision, and sharing excerpts from correspondence with her constituents. The safety and wellbeing of mothers and their babies featured heavily in the speech alongside the importance of retaining services at the Horton.

It is hoped that the session will contribute to wider engagement by the Oxfordshire Clinical Commissioning Group (CCG) and serve as strong evidence in support of a full obstetric service in Banbury.

I am here on behalf of 90,000 of my constituents. On this issue, there are no political differences. We genuinely speak as one.

In Banbury, we have loved our hospital for almost 150 years. We have been fighting to save it for as long as I can remember. We know it is essential – it provides around a third of Oxfordshire’s A&E for example.

I’m also here for constituents who haven’t yet been born. In North Oxfordshire, we are building an average of three houses a day – houses that will be filled with growing families.

We are genuinely traumatised by the botched consultation and being told that A&E might be cut. There is new management at the CCG and we are slowly building a relationship of trust with them again. Despite some changes for the better, we are not yet there with the Hospital Trust.

Significant progress has been made.

This time last year we were in court 47 of the RCJ.

We now have assurances that A&E and Paediatrics will remain open. We have an excellent neck of femur pathway, a new endoscopy unit and extra chemotherapy chairs, which are very much valued locally. There are positive news stories for the Horton.

We remain anxious about the future of maternity and frightened about the safety of mothers and babies.

Patient safety has got to be our top priority. We have been told repeatedly that without sufficient consultants, the obstetrics unit cannot reopen. The Training Dean made that very clear to me when we met in November. Efforts, our efforts, to help with recruitment were ignored by the Trust for two years. They continue to recruit for a post that doesn’t exist. You can only imagine the interview process. Very difficult and I think we need to probe how that recruitment process is going, but I’m sure you [HOSC] will be doing that.

The safety of two different groups of people concern me most:

I will also share my consultation response and travel survey with the committee.

Both the groups – the mums who transfer during labour and those who “choose” to give birth in Oxford - are worried about travel times to Oxford. The journey between Banbury and Oxford is very unpredictable. In 2017, I conducted a travel survey, receiving over 400 responses. Results show that the average time taken to travel and park was one hour twenty minutes. Of course that varies enormously, depending on the time of day. This is not a pleasant experience in the final stages of labour.

As the Member of Parliament, my constituents look to me to find the answers. Many of them have shared their own experiences with me since the downgrade and I would like to read out some short excerpts from real life experiences.

“My birth experience included staying in a hotel in Oxford (with my husband) for two nights due to the extreme weather and unsafe roads. This was required because I had to report to the JR's MAU every day so they could monitor things. I also stayed at the JR for two nights after giving birth to ensure pre-eclampsia didn't develop.”

“Our experience of the JR was not great.  It felt like we were on a conveyor belt with the staff; moved from one person to another which was very impersonal.  If my care had been fully at the JR, when I was admitted, I would have had increased stress as all my support network would be in Banbury and not able to travel through as easily as they could visit to the HGH.  My husband would not have been able to visit me every day.  The costs of travelling daily to Oxford are ever increasing whilst the issue of parking at the JR is a major issue in both trying to find a space and the outrageous costs.”

“What started as a normal, low risk birth at the Horton MLU turned into a life or death situation in a matter of minutes.

My son's cord prolapsed, it started passing down between his head and my cervix. I was rushed to the JR for and emergency C-section on my hands and knees, naked with a midwife's hand in me holding my baby in place so he didn't die. They had to keep his head off his cord you see otherwise it would have cut off his blood flow. I got to the JR just in time, a complete miracle that it was a Sunday morning I can only imagine it might have been a very different outcome of we had been caught in rush hour traffic. Please please save our Horton. My partner had to drive behind the ambulance not knowing if he would find out if either me, our son or both of us had died on route. Banbury needs the Horton maternity unit. It needs the option of on site C-sections. My baby was lucky. My baby survived. I have been left with serious post trauma issues due to the nature of the labour. I have flash backs of the panic of losing my baby. No mother should have to go through this.”

“It was my second birth, and as my first was very straightforward, I planned to deliver at the Horton. I started off there, but my pulse was very fast and so I was transferred to the JR. It seemed a bit weird at the time, as nothing else was wrong. When the baby was born she was fine but I haemorrhaged and had a retained placenta. This would have been a lot more dangerous had I been at the Horton without the specialist medical team that I needed.

It is clear that we need a properly functioning hospital and maternity unit with obstetricians in Banbury as there is no shortage of new housing popping up and frankly in an emergency Oxford is too far away. Haemorrhaging down the M40 would not have been fun.”

“My sister in law had her son at the JR on Tuesday. The journey through her labour was awful. She went to the Horton but was told she'd have to go to the JR due to her waters breaking hours before. She was put in the car and her husband was told that 'if she starts to push, pull over and call an ambulance!' They made it to the JR only to be told there were no beds available.

She had to stay in the waiting room, FULL of people for an hour in labour. They finally got her into an assessment room as the delivery suit was still full and realised the baby was coming. Finally they found her a room with only 15 minutes to spare. There little boy was born at 1am and she had to stay in the delivery room as no beds were available on the ward. There was no cot available until five hours after the birth. The staff were overwhelmed. Extra staff had been called in, including midwives from the Horton. The JR cannot cope! It was an awful experience for her, one that no one should have to go through.”

Mr Chairman, I’m conscious that I have taken up a lot of your time and am very grateful. I do want to say that we must think outside the box. We need a fully functioning obstetric unit in Banbury. Oxford is simply too far for labouring mothers, babies and fathers.

The Horton General Hospital is a vital and much-loved asset for the residents of Banbury and North Oxfordshire.