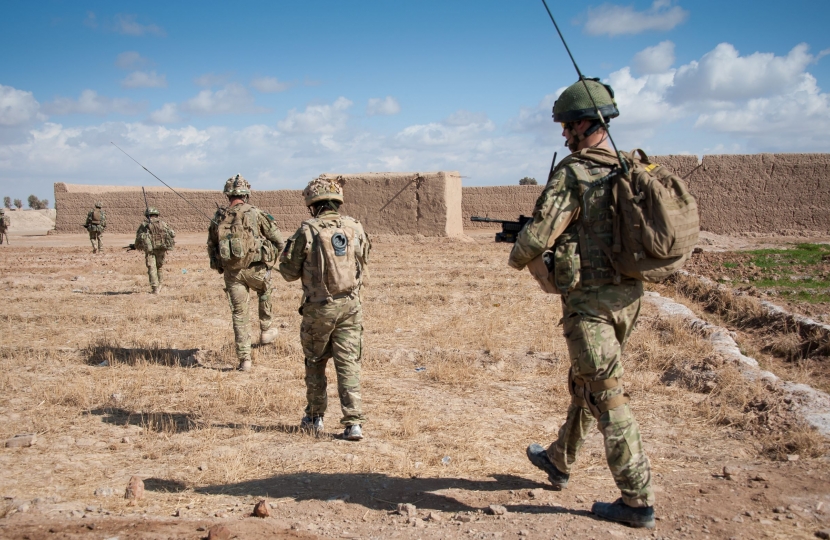 The events we have seen in Afghanistan over recent weeks are truly disturbing.

Yesterday, an appalling terrorist attack outside the Hamid Karzai International Airport left a great number of dead and wounded, including two British nationals, the child of another British national and thirteen American service personnel. My thoughts and prayers are with all those affected by this barbaric act of cowardice.

The Government is doing all it can to get British nationals and those who have supported us out of the country as quickly as possible. Military personnel, embassy staff and Border Force officials are working tirelessly on the ground to support the final stages of Operation Pitting, which has evacuated over 13,000 people in the past fortnight alone.

Locally, Cherwell District Council and Oxfordshire County Council have announced their support for the Afghanistan Citizens’ Resettlement Scheme and joined a multi-agency response to resettle families. It has been brilliant to see communities come together across North Oxfordshire with generous donations and offers of support. Many constituents have contacted me directly to offer their help.

The County Council is asking for all those willing to make donations or offers of assistance to get in touch by emailing: afghan.donationsupport@oxfordshire.gov.uk. This will help to ensure a coordinated local response.

I was pleased to be at Westminster today to hear powerful contributions from all sides and learn more about the Government’s response.

The Prime Minister was very clear that the Government’s immediate focus is delivering on our obligations to UK nationals, and those who have supported us over the past twenty years, by getting them out as fast as we can. While we have reduced our diplomatic presence in Afghanistan, UK Government staff continue to work from Kabul Airport to provide assistance to British nationals and Afghans eligible for relocation. The Prime Minister mentioned Pen Farthing and his team during the debate. I hope those of you are reassured by the Government’s commitment to doing everything it can to help them.

I welcome the announcement that those who have been forced to flee their home or face threats of persecution from the Taliban will be offered a route to set up home in the UK permanently. The Home Secretary has outlined plans for a new Afghanistan Citizens’ Resettlement Scheme to resettle 5,000 Afghan nationals who are at risk in its first year. The scheme will be kept under review for future years, with up to 20,000 Afghans to be resettled in the long term. This new route is modelled on the successful Syrian Vulnerable Persons Resettlement Scheme, which resettled 20,000 Syrian refugees from 2014 to 2021.

The new resettlement scheme is separate to the existing Afghan Relocations and Assistance Policy (ARAP). This policy already offers any current or former locally employed staff priority relocation to the UK if they are assessed as being under serious threat. So far under this programme, 2,052 people have been relocated to the UK, with a further 2,000 Afghan applications completed and many more being processed. The Home Office is working closely with British embassy staff and military personnel on the ground in Kabul to accelerate the ARAP process for all those eligible.

I was also reassured to hear the Prime Minister reaffirm our commitment to the people of Afghanistan. The Government has doubled the amount of humanitarian assistance that we had previously committed to the country with immediate effect. On Monday, the UK chaired the UN Security Council and called for a renewed international focus on the humanitarian needs of the region. Through our presidency of the G7, the UK is also working towards a united response to any new regime in Kabul.

I am very concerned by the ongoing situation in Afghanistan. Over the past twenty years, UK forces and our international allies have made an immense sacrifice to counter extremism and bring a level of peace to the region. I was sadly made all too aware of this before I was elected, when I worked in the Government’s Justice and Security team, including on the inquests of servicemen. I have continued to follow events in Afghanistan closely since being elected. These latest developments in Kabul are disturbing and I will be attending Parliament on Wednesday to learn more.

The Government is committed to ensuring the safety of all British Nationals as they leave Afghanistan. I know Ministers are also working hard to support the many Afghan contractors who have risked their lives working alongside UK forces. Last week, the Defence Secretary announced Operation Pitting to provide military support for the evacuation of British Nationals and other individuals eligible for the Afghan Relocation and Assistance Policy (ARAP). The Home Office is working closely with British embassy staff and military personnel on the ground in Kabul to accelerate the ARAP process for all those eligible.

Yesterday, the Prime Minister spoke to the Secretary Generals of NATO and the UN to discuss the international effort to get Afghan contractors and foreign humanitarian workers to safety. The Prime Minister also emphasised the importance of a united response to any change of government in Kabul. It is vital that the international community come together to make it clear that Afghanistan cannot be allowed to revert to a safe haven for extremism once again.

I can assure my constituents that I will continue to follow this situation closely.