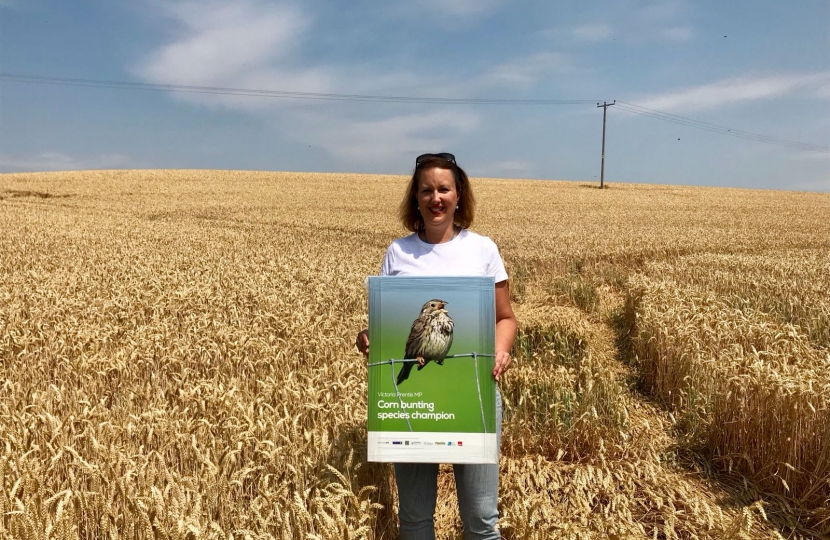 North Oxfordshire MP, Victoria Prentis, has been named the species champion for the corn bunting. The initiative partners MPs from England with wildlife organisations to support the protection and promotion of threatened wildlife.

The corn bunting is a specialist farmland bird often seen perched on a wire or a post. They predominantly breed in cereal crops. As they do not migrate, they depend on farmers helping them by providing cereal grain over the winter, and safe places to nest in their crops over the late summer. Corn buntings continue to decline across the UK with their numbers dropping by over a third since 1995.

Earlier this summer, Victoria visited local farmer and constituent, Hugh Jones in Lower Heyford to find out more about the corn bunting and learn about what action he has taken to try and support the endangered bird.

“I am thrilled to have become the species champion for the corn bunting. As a farmer’s daughter, I always enjoy doing my bit for wildlife and the natural environment. The corn bunting and its distinctive rattling song – which sounds like the jangling of keys – is unmistakable. I am looking forward to my new role and doing what I can to ensure the corn bunting survives and thrives in the countryside.”

Kirsty Brannan from the RSPB added:

“The jangling song of corn buntings is the sound of summer in the British countryside. These birds are just one of many farmland species that need active help to thrive in modern farmland, and I’m delighted that Victoria will be championing the corn bunting in her parliamentary work.”