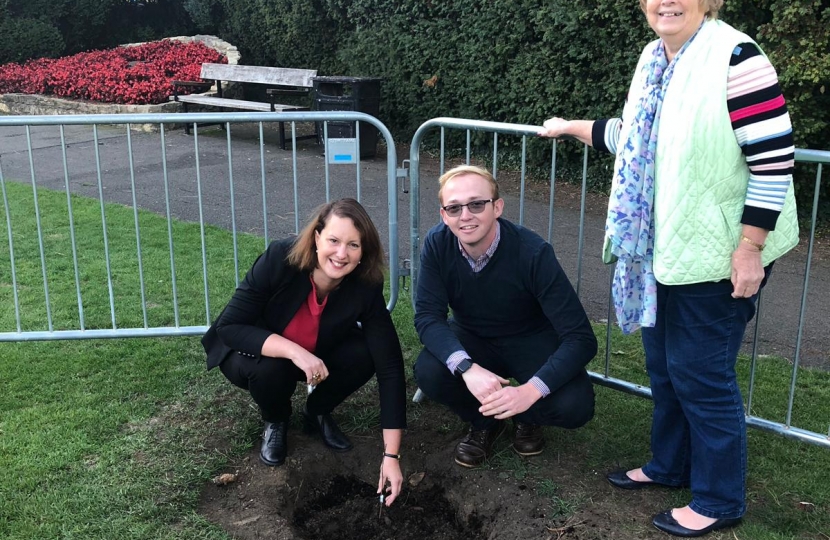 Victoria Prentis, Member of Parliament for North Oxfordshire, has joined over 500 MPs to plant trees as part of the Queen’s Commonwealth Canopy, an initiative focused on uniting members of the Commonwealth in saving the Earth’s forests.

The trees – two silver birches, two rowan and one hazel – were planted across the constituency on Friday 26 October. Victoria planted one of the rowan saplings in Garth Park, Bicester, and the remaining four were planted by Banbury Town Council at St Louis Meadow Park.

The trees were donated by a partnership between The Woodland Trust, Sainsbury’s and ITV, which in April screened a documentary, ‘The Queen’s Green Planet’, following Her Majesty The Queen and her work on this ambitious legacy project.

In support of the programme the Woodland Trust provided 50,000 trees for ITV viewers and, via the Rt Hon Frank Field MP who conceived the QCC initiative, also offered a special commemorative pack to every MP in the UK.

After planting the trees, Victoria said:

“Trees play a vital role in protecting both us and the environment, by reducing greenhouse gases and absorbing pollutants from the air. In turn, we must do our bit to make sure our woodlands and green spaces continue to flourish. That is why I was thrilled to join this wonderful initiative and plant trees across North Oxfordshire, with the help of Banbury and Bicester Town Councils.”

“We are delighted so many MPs have decided to join us in our bid to plant trees as part of the Queen’s Commonwealth Canopy. Trees are a cornerstone of our landscape and countryside and are crucial in improving soil health and water quality, reducing carbon and providing a home for wildlife. I hope the residents of North Oxfordshire will enjoy watching them flourish as part of this wonderful initiative.”

“As the Woodland Trust’s largest corporate partner, we’re committed to raising awareness of the importance of the UK’s woods and trees, and contributing to their conservation. I was lucky enough to grow up surrounded by woods, so trees have a particular resonance with me. Sainsbury’s recently planted its three millionth tree with the Trust, and the thought of being able to get so many more in the ground as part of the Queen’s Commonwealth Canopy with the support of so many MPs is an exciting prospect.”