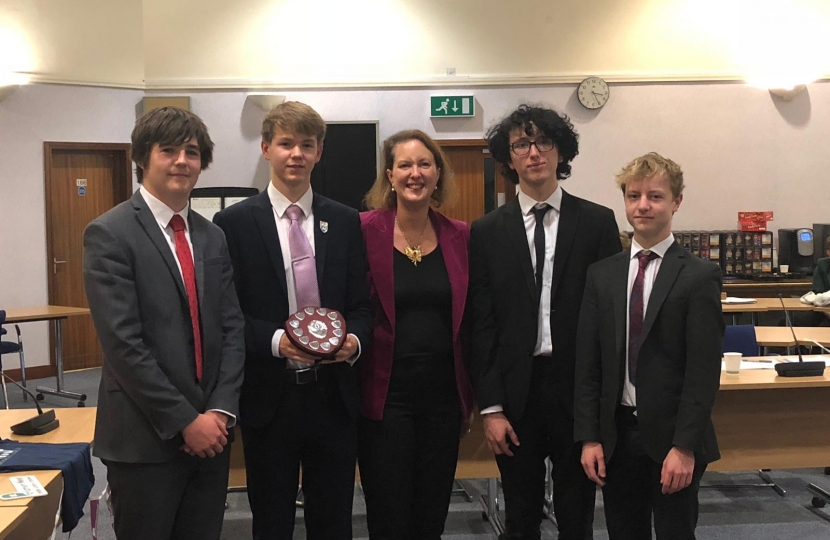 Parliament Week is a yearly event that aims to get young people across the UK talking about Parliament and democracy. This year’s theme was ‘Votes for Women’, following the 100 year anniversary since some women got the right to vote.

The day was attended by local secondary schools, with each school entering one team to compete against another in two rounds for a spot in the final. Round one saw the teams debate gender equality and round two centred on prisoners’ rights. After much deliberation and counting of the scores, The Warriner and Blessed George Napier made it into the final. While the finalists were preparing, the other students had an opportunity to quiz the panel of judges in an exciting Q&A session, which included discussions on education, social media and the NHS. A well fought final saw The Warriner School come away as champions for a third time.

After the event Victoria said: “I am always keen to coordinate the Cherwell Democracy Challenge alongside Parliament Week. As always, the quality of debate and the standard set by the students was extremely high. The Warriner School came away as winners for a third year in a row, with an impressive team performance. I would like to thank Leader of Cherwell District Council, Barry Wood and all the team in Democratic Services for their support of this event and to all those who took time out of their busy schedules to help judge the debates and take part in the Q&A session.

It was a great day and very encouraging to see so many confident young people discussing a wide range of subjects. I am already looking forward to next year’s competition and hope all secondary schools in my constituency will get involved.”