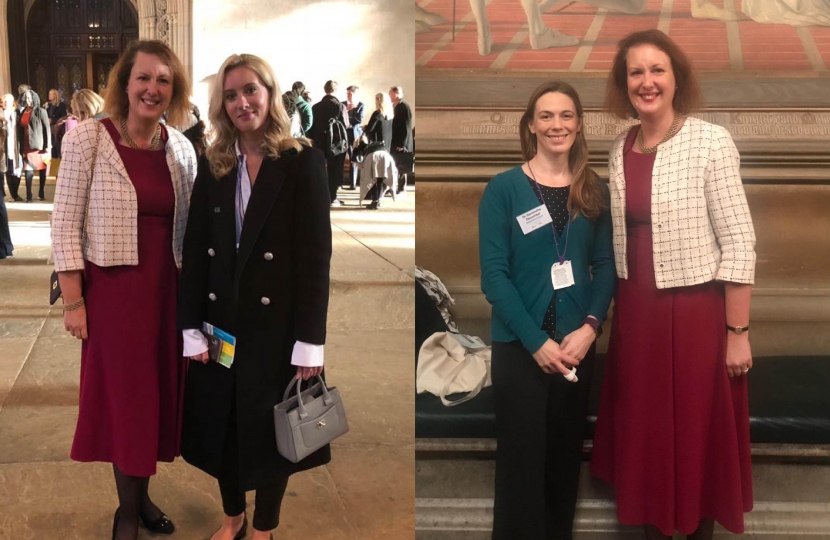 On Wednesday 21 November, Dr Samantha Decombel and Cllr Lucinda Wing were chosen to follow in the footsteps of Victoria Prentis MP during an event aimed at encouraging more women to stand for election.

The initiative saw more than 350 inspiring women from all parts of the country visit Westminster to highlight the need for greater representation in politics. On 21 November 1918, just days after the Armistice, the Qualification of Women Act was passed to allow women to stand for Parliament for the first time.

Since then there have been just 491 women MPs compared to 4503 men. Today only one in three politicians are female. The ‘Ask Her To Stand’ event was aimed at closing the gap and encouraging more women to stand for elected office.

The day was organised by campaigners Frances Scott, 50:50 Parliament, Helen Pankhurst and the Centenary Action Group, the Fawcett Society and the Jo Cox Foundation. Samantha and Lucinda spent time talking to Victoria and seeing first-hand what it means to be a Member of Parliament. They were invited to take part in workshops and listen to talks.

Victoria commented: “I was thrilled to be able to invite two of my constituents to Westminster for the Ask Her to Stand day. Anyone can stand for election and be part of decision making processes. I hope all those who came to Westminster and more will consider standing in the future.”

Frances Scott, Director of 50:50 Parliament said: “On the centenary of when women were first ever able to stand it is wonderful that so many MPs participated in our #AskHerToStand day by inviting women to Parliament.”